Gregory Frost was a guest lecturer at Odyssey 2010. In his lecture, “Character, Viewpoint, and the Critical Voice of the Story: Why It Matters How You Tell It,” Gregory explained how to choose the best point of view for a story, how to create a consistent viewpoint and voice, and how to reveal character through voice. In this excerpt, the first of two parts, Gregory describes the underlying, pervasive importance of point of view to a story. All the elements of fiction are connected to viewpoint. The viewpoint also determines how the reader interacts with a story. Each viewpoint carries different rules; a writer must consider which viewpoint will allow him to do what he wants to do in his story. Gregory begins a discussion of the properties, possibilities, limitations, and challenges of each point of view, including third-person objective (camera view), third-person limited omniscient, and third-person omniscient; this discussion is continued in part 2. He explains the concept of psychic distance, which is critical to point of view. Controlling psychic distance and limiting shifts in psychic distance help the reader to more vividly experience the story. Failing to maintain a consistent psychic distance distracts and confuses the reader, as Gregory’s examples illustrate. 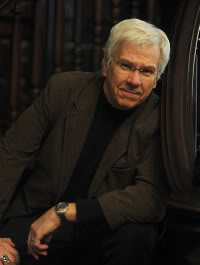 Gregory Frost is a writer of fantasy, thrillers, and science fiction who has been publishing steadily for more than two decades.

His latest work, the compelling fantasy duology, Shadowbridge and Lord Tophet (Del Rey Books) was voted one of the four best fantasy novels of the year by the American Library Association. It was a finalist this year for the James Tiptree Award.

The Shadowbridge duology has garnered much acclaim: Fantasy Book Critic hailed it as “one of the few must-read fantasies of the year” and Publishers Weekly, in a starred review, said, “Frost brings the charm of an ancient storyteller and the wit of a contemporary tale-spinner to this dramatic tale, effortlessly manipulating his troupe of mortals and immortals and bringing the truths and myths of Shadowbridge equally to life.”

His previous novel, Fitcher’s Brides, was a historical thriller that set the fairy tale of Bluebeard in 19th century New York State. Gavin Grant in Bookpage called it a “detailed chiller [that] will stay with the reader for a long time.” Fitcher’s Brides was a finalist for both the World Fantasy Award and the International Horror Guild Award for Best Novel.

Other novels include Tain, Lyrec, and Nebula-nominated SF work The Pure Cold Light. His short story collection, Attack of the Jazz Giants and Other Stories, was given a starred review by Publishers Weekly, which called it “one of the best fantasy collections of the year” while hailing the author as a master of the short story form. The collection includes James Tiptree Award, Nebula Award, Theodore Sturgeon Memorial Award, and Hugo Award finalist fiction.

His shorter work has appeared in The Magazine of Fantasy & Science Fiction, Asimov’s Magazine, Weird Tales, Realms of Fantasy, and in numerous award-winning anthologies. His latest short story can be found in Poe (Solaris Books), edited by Ellen Datlow.

He is a Fiction Writing Workshop Director at Swarthmore College in Swarthmore, PA.

His web site is www.gregoryfrost.com. He’s on Facebook as Gregory Frost; on Twitter as gregory_frost; and his LJ blog, “Frostbites” is at http://frostokovich.livejournal.com.

For more information about Odyssey, its graduates and instructors, please visit our website at http://www.odysseyworkshop.org.