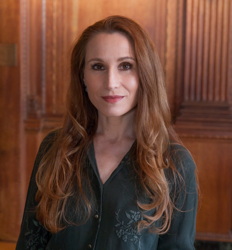 Award-winning author and Odyssey graduate Theodora Goss will be a guest lecturer at this summer’s Odyssey Writing Workshop. She was born in Hungary and spent her childhood in various European countries before her family moved to the United States. Although she grew up on the classics of English literature, her writing has been influenced by an Eastern European literary tradition in which the boundaries between realism and the fantastic are often ambiguous. Her publications include the short story collection In the Forest of Forgetting (2006); Interfictions (2007), a short story anthology coedited with Delia Sherman; Voices from Fairyland (2008), a poetry anthology with critical essays and a selection of her own poems; The Thorn and the Blossom (2012), a novella in a two-sided accordion format; the poetry collection Songs for Ophelia (2014); and her debut novel The Strange Case of the Alchemist’s Daughter (2017). Her work has been translated into twelve languages. She has been a finalist for the Nebula, Crawford, Locus, Seiun, and Mythopoeic Awards, and on the Tiptree Award Honor List. Her poems “Octavia is Lost in the Hall of Masks” (2003) and “Rose Child” (2016) won the Rhysling Award, and her short story “Singing of Mount Abora” (2007) won the World Fantasy Award. Her next novel, European Travel for the Monstrous Gentlewoman, will be published in 2018 by Saga Press.

There are all sorts of things students can learn from teachers and workshops, but in the end, the most important advice I can give them is that at some point, they’ll need to stop listening to other people, or perhaps listen very selectively. Not anytime soon—there’s still plenty to learn. But they’ll get to a point where they’ll need to start selecting, or perhaps creating, their own paths, making their own decisions about what they want to write and how. They’ll decide when to break what they’ve been taught are the rules, or when to throw aside the entire rulebook. They’ll see other writers doing things they’ve never seen before, and they’ll say, “Yes, I want to do something like that, but in my own way.” And that will be wonderful. In the end, every writer is different—we all have our own stories, we all decide how to tell them, and none of us have exactly the same careers.

You have published numerous poems and a poetry collection. What can writers of prose learn from poets? What are some poetic devices that fiction writers can use in their prose?

I think that reading, and certainly writing, poetry teaches you a close attention to words and sentences. You spend a lot of time agonizing about how something sounds—how the words flow or don’t, how the vowels and consonants work together or against one another. You pay attention to the rhythm of what you’re writing. That can be a good or bad thing—it can make you a better writer, but if you’re paying too close attention to the sounds of your sentences, it can also make it impossible to finish that first novel draft. Prose is not poetry—I would avoid deliberately using poetic devices in prose unless you want it to sound poetic. That’s up to you, of course—use all the similes you want, if you think they’re appropriate. But also learn the rhythm of ordinary speech—learn how to sound awkward, rough, inarticulate, because sometimes your characters will be those things as well.

Much of your writing seems influenced by fairy tales, such as “Red as Blood and White as Bone,” which came out last year on Tor.com. What can authors learn from reading fairy tales?

Fairy tales are almost pure plot. There’s very little character development or motivation in fairy tales. We don’t know why the wicked queen is so obsessed with her beauty that she would kill her own stepdaughter—her own daughter, in older versions before the Grimms made the story more child-appropriate. We get very little setting: there’s a castle and the deep, dark woods. But what we do get is a story in which each event leads to another: the mirror says Snow White is the fairest, so her stepmother tries to kill her three times, and the last time she succeeds, but the prince comes along, falls in love with her beauty, and rescues her…events come in quick succession. As human beings, we really, really like story, and fairy tales can teach us how to construct stories driven by strong plots. They also teach us to create strong visual images: the drops of blood on snow, the red apple that Snow White bites into, the glass coffin. The queen dancing herself to death in iron shoes. There’s a reason fairy tales get written and rewritten—they satisfy something deep within us that longs for story, and as writers we can choose whether or not to satisfy that longing.

Your book, The Strange Case of the Alchemist’s Daughter, published through Saga Press in 2017, stemmed from a short story “The Mad Scientist’s Daughter,” which first appeared in Strange Horizons in 2010. What made you want to continue exploring the characters and world in your short story? What were the challenges you faced in expanding upon the short story?

I loved the characters, and I thought there was a lot more story there to be told. That said, it was a challenge—structuring the novel was very difficult. I had written so many short stories by that point that I had to unlearn short story structure in order to write a much longer narrative. For example, short stories should provide satisfying plot arcs for the reader. But a novel chapter should provide an unsatisfying plot arc—in other words, the arc must be there, but at the end of the chapter the reader has to feel unsatisfied, so he or she will read on to the next chapter. And short stories telegraph a lot more—you can’t explore your character in anywhere near the same depth as in a novel. Part of the pleasure of writing the novel (and its sequel, which comes out next summer) was getting to know these characters as they change and grow over time.

I guess one advantage is that you can do pretty much whatever you want to! You can play with genre conventions, choosing the ones that fit the particular content you’re trying to create. The challenge is that experimental fiction is harder to sell. That said, almost everything I write is experimental in some way—at least, it’s an experiment for me! Everything I write is new and different. I never feel as though I have this writing thing figured out. I don’t think I ever will.

You attended the Odyssey Writing Workshop in 2000. What made you decide to attend the workshop?

I had always wanted to be a writer, and around that time I started sending out stories, but they were getting rejected (as is usually the case for new writers!). I knew there was so much I still needed to learn, and I thought Odyssey would give me the foundation to become the writer I wanted to be. I was absolutely right—most of the technical things I learned about writing, I learned at Odyssey. It was a wonderful education in writing technique, and at the same time it introduced me to the world of publishing science fiction and fantasy. Now I teach at the Stonecoast MFA Program in Creative Writing, on the popular fiction track—I’m teaching graduate students who want to become science fiction and fantasy writers, and so often I find myself telling them the exact same things that Jeanne Cavelos told me! I’m very glad to still have her voice in my head, after all these years. Oh, and a year after Odyssey, I sold my very first short story!

How do you feel your writing and writing process changed as a result of having attended Odyssey? What insights did you gain into your own work?

It was like night and day. That sounds like an advertisement, but it really is true. The only creative writing classes I had taken before Odyssey had been for poetry, and they had not been very good. I wrote stories instinctively, as many beginning writers do. But I did not think of what I was doing in terms of technique, in terms of producing certain effects—I also did not think about my audience. I did not know what the reader needed from me in order to understand and get inside my story. I started learning those things at Odyssey—I’ve continued learning about them, since each writing project is a new experience, a new opportunity to learn how to do whatever it is I’m doing. But what I learned at Odyssey really was the foundation for all the things I’ve done since. And it’s the foundation for how I now teach writing. If you think about it as a ballet, Odyssey is where I took my first serious, professional dance class.

Yes! Always. I’m currently working on the third and final adventure of the Athena Club. The second book, European Travel for the Monstrous Gentlewoman, comes out next summer, and there will be one book after that. I’m also working on a collection of fairy tale short stories and poems. And of course there are always more short stories to write. It’s keeping me busy, but that’s a good thing.