Holly Black will be a guest lecturer at this summer’s Odyssey Workshop. She is the author of bestselling contemporary fantasy books for kids and teens. Some of her titles include The Spiderwick Chronicles (with Tony DiTerlizzi), The Modern Faerie Tale series, the Curse Workers series, Doll Bones, The Coldest Girl in Coldtown, the Magisterium series (with Cassandra Clare), The Darkest Part of the Forest, The Cruel Prince, and The Wicked King. She has been a finalist for an Eisner Award and the recipient of the Andre Norton Award, the Mythopoeic Award, and a Newbery Honor. She currently lives in New England with her husband and son in a house with a secret door.

To write books for their reader selves, rather than the books they think they’re supposed to write. You are your best audience.

I sort of stumbled into writing for teenagers and younger readers, but it has been absolutely great. Young readers care about stories and are enthusiastic, open, and encouraging. I think the biggest challenge for adults writing for younger readers is putting aside their own preconceptions of what children’s books are and what they sound like.

You’ve co-edited three anthologies. What did working on those anthologies teach you about your own writing or editing process?

I really enjoyed getting to work with writers—both those I knew and those I didn’t—on their stories. Giving feedback and critique is something I really love doing, so the whole process was a lot of fun. I think what I learned that was most interesting and useful to me was how different each writer’s approach was to the same task and how different their processes were. 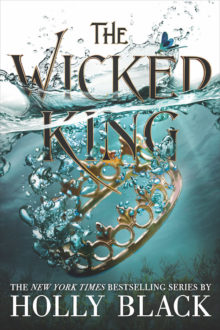 You’ve written about faeries many times, including in your most recent release, The Wicked King. What draws you to write about them time and again?

The thing I come back to again and again when I think of my love of faeries is the symbology of faerie fruit—something so delicious that all other foods are like ashes in your mouth. And that’s what Faerie often is, to me. A place of ruinous beauty, where, once you go there, nothing else may ever satisfy you again.

How many stages does your work go through before you send it off to a publisher? How much of your time is spent writing the first draft, and how much time is spent in revision? What sort of revisions do you do?

I have a terrible habit of not working in complete draft revisions, but rather changing things piecemeal, rewriting chapters and even just scenes when something feels wrong until I can figure out how to get it right. For that reason, it’s hard to entirely know how many full revisions exist before I turn in the “first draft” of the book. I would say there are three basic stages, though: drafting, revising, then revising again post-feedback.

Usually I think of the early revisions as falling first into the category of “what actually happens in this book?” and then into the category of “characters fight back against the plot I made without consulting them.” Later revisions usually fall into the categories of making the story feel more true, making the language more lush and precise, adding more emotional punch to the scenes, twisting the twists harder, fleshing out, rethinking absolutely everything, and general engoodening.

It’s hard to choose just one! But one thing that I’ve been focusing on lately is trying to draft faster. I often get bogged down in getting everything perfect the first time through—an impossible task. Better to go fast and make the inevitable mistakes faster, at least.

I am currently finishing up the last book in the Folk of the Air series, called The Queen of Nothing. I am starting several other projects, but nothing I can talk about yet.