Freelance editor, fiction author, and wood artisan Adria Laycraft earned honours in Journalism in 1992 and has always worked with words and visual art. She co-edited the Urban Green Man anthology in 2013, which was nominated for an Aurora Award, and launched her debut novel Jumpship Hope in 2019. Look for her short stories in various magazines and anthologies, both online and in print. Adria is a grateful member of Calgary’s Imaginative Fiction Writers Association (IFWA) and a proud survivor of the Odyssey Writing Workshop. Learn more at adrialaycraft.com, or follow her YouTube channels Carving the Cottonwood and Girl Gone Ground.

You attended the Odyssey Writing Workshop in 2006. What made you decide to attend?

A big-name author told me I was ready, that it would do me good if I was up for the commitment. I had only ever heard of Clarion at that point. I wanted to prove to myself that I had what it took. I actually did my own personal Odyssey the winter before, following the syllabus I found online, just to test myself and my discipline.

How do you feel your writing and writing process changed as a result of having attended Odyssey? What insights did you gain into your own work?

I learned about my limiting beliefs, my strengths and weaknesses, and what to do with it all. I also learned how to dig for theme, and how it’s tied to the ending, and why my endings weren’t working yet. Then it was just a matter of practice and more practice to put everything we learned in such a short time into, well, practice.

Congratulations on the release of your debut novel, Jumpship Hope, released in 2019 through Tyche Books! What was your process like in writing this novel? What inspired you to write a story about a desperate pilot looking for a way to save her friends from starvation by traveling to an alien solar system?

Thanks! What a fun process, getting published! Remember our Odyssey assignment to write a flash fiction piece for the slam? I had no clue how to be so brief, so I wrote this dark flash piece that of course became a novel. The process was slow, with several complete rewrites over the years. As to inspiration, well … the New Hampshire license plates say, “Live Free or Die.” With that as the theme, I decided to find out who these people were and why their lives were so grim.

You have published multiple short stories, many of which have appeared in anthologies or magazines such as Orson Scott Card’s Intergalactic Medicine Show. What are some of the challenges you find unique to writing short stories?

I had years of help from my critique groups, plus I read more short fiction now. But to be honest, I still prefer the broad scope of long fiction. Short stories are too short for me; I can’t get invested in the characters or escape into their experience like I can in a longer piece. So, the big challenge really is that simple: being brief, with impact.

In addition to being a writer, you’re also an editor, offering conceptual edits, line edits, and copyediting. What are the most common weaknesses you see in the stories you edit? How has being an editor helped with your own prose? 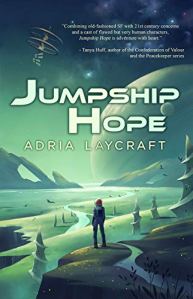 The common ones are the ones I still have to weed out of my own work. First is conceptual: does the opening pose the right questions, are story promises fulfilled, are later scenes properly set up, is the backstory necessary/too soon, and is every scene vital to the plot? Then line-by-line work, searching for word repetition, awkward phrasing, repeated ideas, empty wordage, statements that are obvious or implied, and so on. Finally, all the copy-edit stuff that I always hope another set of eyes will check other than just mine, like spelling, typos, grammar, punctuation, formatting, and so on. All of these are common things to correct in manuscripts.

As to that second question, being an editor doesn’t help me write. Not one bit. I actually stepped away from writing for several years while establishing myself as an editor and have only recently returned to it. It’s difficult to turn the editor off.

Feeling like a newbie again. I mean, not really, the foundation stuff is there, but I’m remembering how to have bits and pieces of scenes scattered through a notebook and somehow make sense of it all. It always feels like chaos that will never be a seamless story, but I’ve learned to stick with it, see it through, and usually it comes together in the end.

I am writing Jumpship Dissonance, the second book in the Jumpship series, followed by the third and final book, Jumpship Freedom. But I also like to carve cottonwood bark and help other authors get published, so it is a slow process. Look for Jumpship Dissonance in 2021 if all goes well!