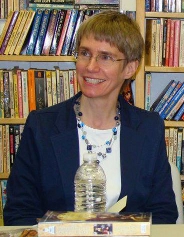 Author Patricia Bray will be a guest lecturer at this summer’s Odyssey Writing Workshop. She has written a dozen novels, including Devlin’s Luck, which won the 2003 Compton Crook Award for the best first novel in the field of science fiction or fantasy.  A multi-genre author whose career spans both epic fantasy and Regency romance, her books have been translated into Russian, German, Portuguese and Hebrew.  She’s also spent time on the editorial side of the business, as the co-editor of After Hours: Tales from the Ur-Bar (DAW, March 2011) and The Modern Fae’s Guide to Surviving Humanity (DAW, March 2012).

Patricia lives in a New England college town, where she combines her writing with a full-time career as a Systems Analyst, ensuring that she is never more than a few feet away from a keyboard.  Visit her website and blog at http://www.patriciabray.com.

You are a multi-genre author: how do you find the writing techniques for epic fantasy and Regency romance compare?

My Regencies and my fantasy novels are both (all?) character-driven stories.  I used similar processes for outlining the novels, and both types of stories required extensive research and world-building.  The main difference was that traditional Regencies are constrained by length and by the type of story that needed to be told–primarily a romance, focusing on two central characters, with a “happily-ever-after” ending.  There wasn’t room to develop multiple complex subplots, or introduce too many supporting characters.  In my fantasies I am able to tell bigger stories, and explore darker themes.

You’ve also spent time on the other side of the desk as editor.  Can you tell us what you learned from the editorial experience?

The most important thing I learned was that the details matter.  It’s not just whether or not you can tell a good story, but did you follow the guidelines for the type of story being requested? Did you turn it in on time?  Did you remember to run spell check and then read through the story to catch those errors that spell check will miss?  I was astonished by how many authors failed these basic steps.  And as you can imagine, given the choice between two equally good stories, one of which is a clean manuscript, and one of which is a mess, you can bet which one the editor is going to buy.

Many writers struggle to eke out a good writing schedule.  As a full-time Systems Analyst, how do you make time for writing and life in general?

I continue to struggle with finding the right balance.  In the past I’ve had jobs that ran 40-50 hours a week, but in recent years I’ve had to work longer hours, including weekends, which used to be prime writing time.  In response I’ve learned to write in shorter blocks of time, and I’m now focusing on short-term goals to maintain the sense of progress.

At your last visit to Odyssey, you lectured about sidekicks–how to create them and how to use them.  Can you share a few pieces of your advice here, such as some of the purposes a sidekick can serve in a story?

I defined a sidekick as a secondary character whose relationship with the hero drives the action of the story forward.  The sidekick balances the hero–if the hero is an idealist, often the sidekick will be a cynic; if the hero is a warrior, the sidekick might be a scholar or a mage.  There are multiple uses for a sidekick, for example to bring information forward that the hero knows but the reader does not.  The sidekick can provide a different perspective on events, or serve as a gateway character that readers can identify with.  Often the sidekick can do what the hero cannot, whether that’s stopping to ask for directions, or quietly assassinating a potential threat. The best sidekicks are fully developed characters, with their own goals, conflicts and motivations.

[Editor’s note: To listen to excerpts from Patricia Bray’s lectures on sidekicks, check out Podcasts #31 and #32]

Some authors believe that they need to know everything about a character to write him in a powerful and believable way and make him come to life.  Other authors believe that they need to discover their character as they write, and to leave large chunks unknown, in order to stay focused on the parts of the character that are important to the story.  How much do you develop your characters, and when in your process does that happen?

I’m one of those “plot it out ahead of time” writers.  I can’t start writing about a character until I feel I know him.  Details may emerge as I write, but I need to have a handle of the central core of what makes the character tick.  I use a variety of techniques for getting to the heart of my characters, including character interview worksheets, and writing extensive biographies.  It’s the iceberg technique–90% of the details never make it into the story, but I need to know them in order to make the character convincing.

I definitely consider the emotional impact of each scene.  If there’s no impact, then the reader might as well put down your book and pick up a cereal box instead.  That’s not to say that every scene needs to be over the top, but there has to be an emotional hook to pull the reader along.

You mention on your blog that since your first stint as a guest lecturer at Odyssey you’ve published a short story–a rarity for you–and co-edited anthologies.  What did you learn about the differences between novels and short stories in this process?

The short story format was difficult for me, because I was used to writing long character arcs and deep plotting.  The temptation was to write the opening chapter of a novel, rather than a story that could stand on its own.  After several frustrating starts, I became paralyzed and realized that I was over-thinking the process.  So I threw away the story I was working on, and gave myself permission to write something fun.  The “just for fun” piece was the one [“Last Call”] that was included in After Hours: Tales from the Ur-Bar.

What do you think is the most important advice you can give to developing writers?

The key to a successful writing career is being able to deal with uncertainty and rejection. Whether it’s a harsh critique or yet another rejection for a story you love, you need to be able to put it behind you, and focus on your writing.  Keep writing, and keep working on your craft, and you’ll find success.

What projects are you working on now?  Anything launching soon?

No news that I can announce yet, but hopefully soon.  Joshua Palmatier and I are putting together the proposal for our next anthology project, and I’m also working on a new fantasy novel.